Once upon a time, King Akbar had an argument with his minister Birbal. King Akbar was so angry that he ordered Birbal to leave the kingdom and go away.

King Akbar said, “Birbal. You have made me very angry. Leave my kingdom and go away immediately. If I find you in my kingdom tomorrow morning, you will be jailed.”

Birbal was a very obedient minister. He apologised to the king and left the kingdom immediately. He went to a small village and changed his name. He started working in a small farm where he grew watermelons.

A few weeks passed and Akbar started to miss Birbal. Birbal was not only his minister but also one of his closest friends. Birbal was the only one who understood what Akbar wanted. He was fearless and always did what was right for the kingdom, sometimes even opposing the views of King Akbar.

Akbar thought, “When Birbal was in his court, Birbal would never fail in providing a solution to any problem. I could always trust his judgement.”

Akbar sent his soldiers to find Birbal but they unsuccessfully returned. Birbal was hiding well just as the king had ordered. No one knew where Birbal was.

Akbar made an announcement, “There is only one way in which I can bring him back. I will issue an order. Any man who brings to me, a pot full of wit shall become my advisor and minister. All his crimes shall be pardoned.” 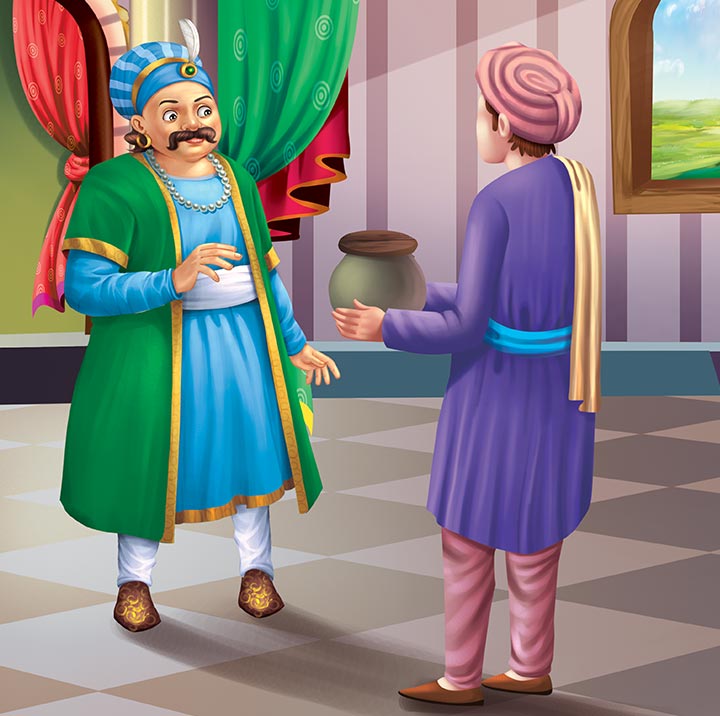 This message reached all the villages and even Birbal heard it. He knew that Akbar had forgiven him and wanted to bring him back. Birbal thought of a cunning plan.

He went to his farm and found a small watermelon which was still growing. He put it inside the steel pot and watered the plan well for an entire month. The watermelon grew large and stopped growing only when it completely fit the walls of the pot.

Birbal then sent the pot to Akbar saying, “Dear King, this is your pot of wit. Please remove the wit fully without breaking the pot.”

Akbar realized that only one man could think of such a funny and intelligent answer. Akbar himself went to the village and brought back Birbal.