Once upon a time, there was a farmer who wanted to water his crops. Since the river was far away, he wanted to buy a well. There was a rich man who owned a well.

The farmer purchased the well from the rich man for a price of 5 silver coins. The rich man was very cunning and wanted to cheat the farmer. He wanted to earn more money. 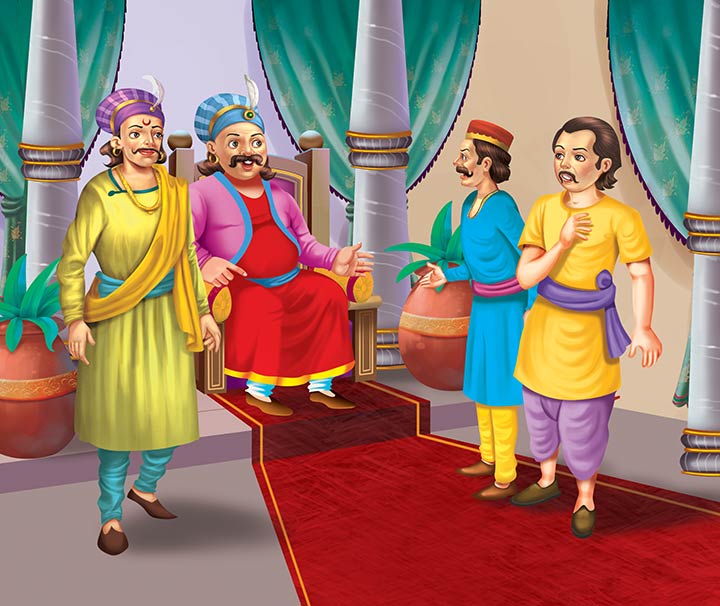 The next day, the farmer went to the well with a bucket to draw water from the well. The rich man was standing outside the well and was smiling broadly.

The rich man said, “I have sold you only the well and not the water. If you want to take water from the well, you must pay me one silver coin every week.”

Not knowing what to do, the poor man began to cry. His neighbor saw him and said, “My dear friend, go to King Akbar and ask for justice. King Akbar is a great king and he shall help you.”

The poor man went to the king and complained about the rich man. Akbar listened patiently and looked at his minister Birbal.

Birbal said, “My Lord, I shall take care of this. I shall go and pay a visit to this man.”

Birbal was a very famous minster who was known for his intelligence and wit. He went with the farmer to the rich man’s house.

The rich man laughed and explained to Birbal, “Dear Birbal. I have only sold the well and not the water. If I sell a pot, should I also give away whatever is inside? That is not fair”

Birbal said, “You are absolutely right. Does the water belong to you?”

The rich man said, “Of course it does.”

Birbal said, “Then your water is occupying the well belonging to the farmer. You must pay him 2 silver coins weekly as rent.”

The rich man realized that he could not cheat the farmer anymore. He apologized to the farmer and to Birbal. He also paid the farmer 1 silver coin as a penalty.

Moral: “Ability proves itself by deeds.”