Once upon a time, King Akbar was walking around the lake with his minister Birbal. The weather was very cold. The King touched the water and immediately took it out.

King Akbar said, “Birbal. This was is very cold. I do not think that anyone can survive one night in this cold water.”

Birbal said, “My dear King, I believe that is possible for a man who is brave and strong. I would say that it is not impossible”

King Akbar said, “Birbal. I shall give a 1000 gold coins and a job as a palace guard to anyone who is able to survive one night in the freezing water.”

The announcement was made throughout the kingdom. Only one poor man was willing to take up the challenge. He stood in the freezing water all night. There were two guards watching him all night and he survived the challenge.

The next morning, the man was taken to the court for his reward. King Akbar asked, “My dear brave man, how did you survive the extreme cold for so long?”

The man said, “My king, I was seeing a fire which was burning far away. I imagined that the fire was near me and that gave me warmth and the strength to survive the cold.”

King Akbar said, “This man is not worthy of the reward since he managed to survive the cold only because of the lamp. If the lamp was not there, he would have failed.”

The man was very upset and felt that he was cheated. He went to Birbal and asked for his help. Birbal was a very clever minister and asked him to go home and that he will sort out the problem. 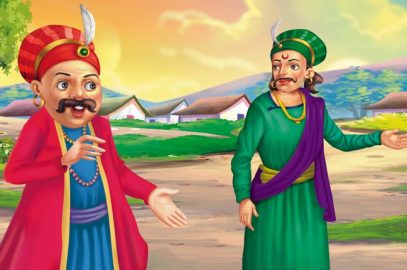 Birbal was in the kitchens the next day and sent the cook home. Akbar went to the kitchen to find out why Birbal was cooking and not his cook. Birbal was beside the fire and the pot was 6 feet above it. Akbar started to laugh loudly.

Akbar said, “Birbal, the pot is so far away from the fire. What are you cooking?”

Birbal said, “I am making Khichadi for you, my King.”

Akbar said, “How will it become hot? The fire is not near the pot.”

Birbal said, “But my lord, yesterday you said that the poor man stayed warm by looking at the fire. I am cooking Khichadi the same way.”

Akbar realized his mistake and called the poor man to his court the next day. He was awarded 1500 gold coins and a job as a palace guard. Birbal was awarded one gold necklace for his intelligence.