Once upon a time, a rich merchant was robbed in the Akbar’s kingdom. The merchant was very upset and wanted justice. He went to court and asked King Akbar for help.

King Akbar said, “Dear Birbal, please help this man. Recover the money and jewellery for him.”

Birbal said, “Yes, my lord. Dear merchant. Is there anyone you suspect?”

Birbal went to the merchant’s house and asked the merchant to call all his servants. The servants stood in a straight line. 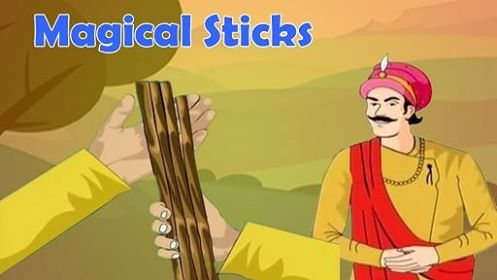 Birbal said, “Among one of you is a robber. I shall give you each a magic stick. This stick belonging to all the innocent servants was not grow in length. The stick belonging to the guilty servant shall become longer by 2 inches.”

The next day, Birbal called all the servants into the room and asked them to give their sticks. One stick was 2 inches smaller and the other sticks were of the same size.

Birbal called the servant with the shorter stick and said, “This man is the thief.”

The merchant asked, “But how did you find out that he is the thief?”

Birbal said, “It is very simple. It is only an ordinary stick. The thief believed that the stick was a magic growing stick. So he broke off 2 inches so that it would remain the same size.”