King Akbar was very close to his minister Birbal. He would always listen to his advice. He would always laugh at his jokes. Birbal was the favourite to Akbar. All the other courtiers were very jealous of Birbal. They plotted for Birbal’s downfall.

The King’s barber was also very jealous of Birbal. He made a cruel plan against Birbal. Everyday, he went to trim the Emperor’s beard.

He said to the King, “Sir, last night I dreamt about your father.”

The Emperor was very interested since he loved his father very much. He asked, “Really? What did my father say to you?”

The barber said, “He said that he is very happy. However, he misses a quick witted man who can make him happy. He asked me to tell you to send Birbal.”

Next day, the Emperor summoned Birbal and said, “Birbal, you are very loyal to me. I believe that you will be ready to sacrifice anything for your King. Am I right? “

Birbal instantly replied, “Yes, My King. I shall do anything for you. That is right.”

The King said, “Birbal, I have heard from many that my father is alone in Heaven and wishes your company. Please go to the heaven and make my father happy.”

Birbal understood immediately that this was somebody’s plan to kill him. He did know who wanted to kill him and he could not refuse the King.

Birbal politely said, “I will go to heaven and make your father happy. However I need a few days to prepare. Is that ok my King?”

The King was very happy and said, “Birbal, you are the most loyal minister I can ask for. I will grant you one week. Prepare yourself to go to the heaven!”

Birbal went back to his home. He needed a plan to save his life. Birbal was very clever and soon had a brilliant idea. He dug a deep ditch near his house. This ditch would be his grave. Thorough the ditch he dug a tunnel that opened in the basement of his house.

Once the tunnel was done, he went back to the King and said, ” My King, I am ready to be buried. I wish for two conditions. These are my last wishes.”

The King said, “Yes Birbal. I will fulfil your last wishes. Tell me, what are your conditions?

King Akbar said, “Sure. That is a reasonable request.”

Birbal said, “Thank you, my King. The second condition is that I want to be buried alive. I believe that I can reach heaven alive keep your father happy.”

Akbar readily agreed to Birbal’s second condition as well. Birbal was buried alive near his house. The jealous courtiers and the barber were very happy as they thought that Birbal was dead.

After the burial, Birbal went through the tunnel into his house. He lived there in hiding for six months. 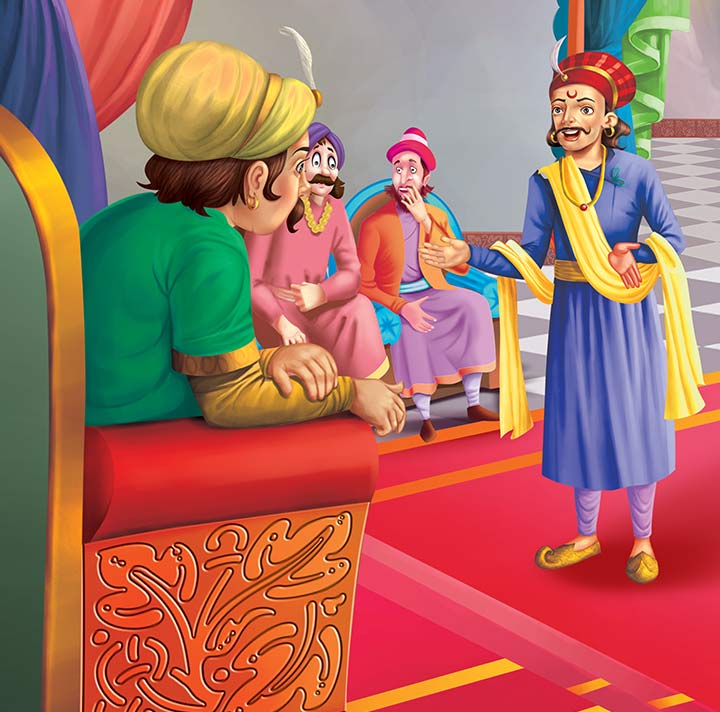 He also used his spies and found our who had this plan. It was the barber and 6 other ministers. After six months, Birbal had a fully grown beard and shabby hair. He came out through the grave and went to the Emperor.

King Akbar was surprised but very happy to see Birbal once again. The couriers and the barbers were shocked.

King Akbar asked Birbal, “You are back! I am so happy. How is my father? How did you come back? Does he want something else?”

Birbal said, “My King, everything is well in the heaven. I was with your father and he is healthy and happy. He was so happy with me that he gave me permission to return back to earth to be with his favourite son.”

Akbar was very happy to hear this and wanted to know more about his father.

King Akbar asked Birbal, “So, does my father want anything else?”

Birbal said, “Yes Your Majesty. There is no barber in heaven. You can understand this by seeing my grown beard and hair. He asked to send your own barber to him immediately.

“He also asked for 6 other minsters. He says that these seven cruel people together lied to you about the dream and wanted to kill Birbal. He says they should be sent to heaven where he will punish them himself.”

Akbar understood what was going on. He apologised and rewarded Birbal. He also threw the barber and the six ministers into jail for life.