Once upon a time, King Akbar announced, “My dear courtiers, I have a problem for which I need a solution immediately.”

Everyone in the court looked at King Akbar.

King Akbar said, “Someone dared to pull my moustache yesterday. What is the punishment that I should give him?”

Everyone in the court became very angry and started to shout.

One minister said, “He should be flogged with a whip!”

The chief of the army said, “He should be hanged.”

Another minister said, “He should be jailed for life! What a fool!”

Similarly, all the ministers kept suggesting many punishments. Only Birbal was silent and smiling.

The King asked Birbal, “Why are you so quiet Birbal? And why are you smiling? What punishment should I award this person?”

Birbal said, “My dear King, I think you should give him a sweet and a big hug.” 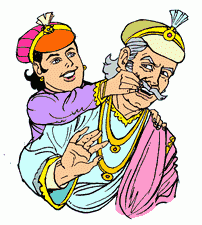 Akbar angrily said, “What are you saying Birbal? Have you gone mad? Are you saying that such a person should be rewarded?”

Birbal replied politely, “I am not mad, my dear King! I can give you my explanation!”

Akbar said, “Then tell me why I should reward the person who pulls my moustache?”

Birbal replied politely, “The only person who can dare to do this is your grandson. And I know that you love giving sweets to your grandson.”

The Emperor laughed very loudly and agreed. He was very happy with Birbal’s answer and gave his 100 gold coins as a reward.