Krishnadevaraya said, “The red peacock is so beautiful. I have never seen such a bird. Where did you find it?”

Chatur Pandit smiled and said, “My King, please accept this gift. My servants searched many jungles and caves in Madhya Pradesh to find this bird. This bird was hiding in the caves. Apparently, the red peacock is allergic to water so it hides from the rain.”

Krishnadevaraya was amazed, “Nature is amazing. The blue peacock loves the rain while the red peacock hates the rain.”

Tenali Raman thought, “That sounds very suspicious. No animal can survive in the forest if it is allergic to rain. Even animals in the desert need water.”

King Krishnadevaraya was very impressed. He said, “I shall keep this bird hidden from the rain. Thank you, Chatur Pandit! How can I reward you?”

Chatur Pandit said, “My King, it cost me a 100 gold coins to search the forest get the bird. That should be enough for me.” 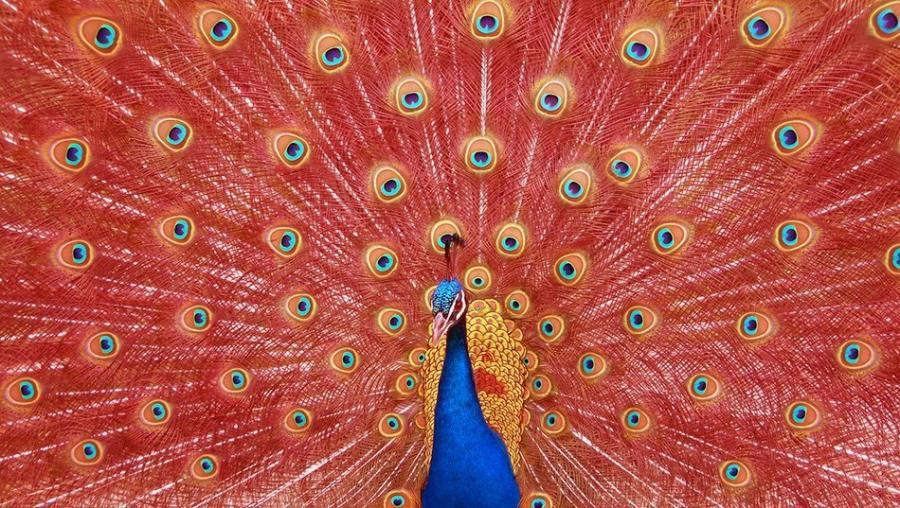 Tenali Raman, “My King, it is such a lovely bird. Please give Chatur Pandit his reward. One feather has fallen down from the peacock. Can I keep it, my king? I will also go to Madhya Pradesh to get more birds like these.”

Krishnadevaraya said, “Alright, Tenali. You can keep the feather and also you have 2 weeks to find more birds.”

Tenali Raman did not go to Madhya Pradesh. Tenali Raman asked his servants “I washed the feather and found that it is just painted with a beautiful red dye. Find the painter who has painted that peacock.”

The kingdom did not have many painters. His servants searched and found the painter in just two days.

The painter did not understand why Tenali was asking such a request. He painted the peacocks exactly how Tenali Raman asked and gave it to him.

Tenali Raman took the peacocks to the court in one week. The King was very surprised and amazed.

King Krishnadevaraya said, “Tenali. You are incredible. Tell me, where did it cost you to find these birds. I can give you 1000 gold coins.”

Tenali Raman smiled and said, “My King, that is not what it cost to find these birds.”

King Krishnadevaraya said, “What is the price then, Tenali Raman?”

Tenali Raman laughed and said, “3 silver coins. All I need is one bucket of water, a few bags of paint, and this artist. His name is Ram Datta. He painted the first red peacock and also these 10 peacocks.”

King Krishnadevaraya became very angry and said, “Chatur Pandit, how dare you lie to your king.  You are hereby banished from this kingdom. Return all the gold which I gave you and 1000 gold coins as a punishment.”