Tenali Raman was a famous minister in the court of King Krishnadevaraya, the ruler of Vijayanagar. Tenali Raman was very famous for his wit and humour. He played a lot of practical jokes on people and made them understand about life.

There once lived a man called Ramaya in the town of Vijayanagar. There was a rumour that anyone who saw the face of Ramaya in the morning would not be able to eat anything throughout the day. All the people of Vijayanagar avoided Ramaya all the time. This made him very sad.

One day, the news also reached the king’s ears. He wanted to find out the truth for himself and went to see Ramaya early in the morning. When Ramaya woke up, he saw the King sitting in front of him wearing a blindfold. The King removed his blindfold and Ramaya was the first face that he saw. Tenali Raman also heard what the King and decided that he would play a prank on the king.

In the morning, the king sat to have his breakfast. Suddenly a minister rushed in and said, “My King, the queen is very ill and wishes that you come and see her immediately.”

He did not eat his breakfast and rushed to the Queen’s room. The queen was lying down holding her stomach and crying. The king sat next to her for the next two hours after which she said that her pain was now fully gone.

The King was very hungry and it was already lunch time. He asked for food to be served. The chef brought him very tasty food. The King was about to take his first bite when he noticed that there was a large bee in his food. He threw the plate on the floor and screamed at the chef.

The chef bent down and collected the food. He looked confused and said, “My King, but there is no bee here. Please look at the food.”

There was no bee in the food. King Krishnadevaraya was confused. He did see a bee and now it was not there. By the time the food was cooked for the second time, it was another two hours. The King had lost his appetite.

The king realized that whatever the people said were true. Ramaya was jinxed. He ordered his soldiers to hang Ramaya immediately.

The soldiers did not want to hang Ramaya as he was innocent. However they could not go against the King. They took Ramaya into jail, when they met Tenali Raman on the way. Tenali whispered something in Ramaya’s ear and Ramaya smiled. 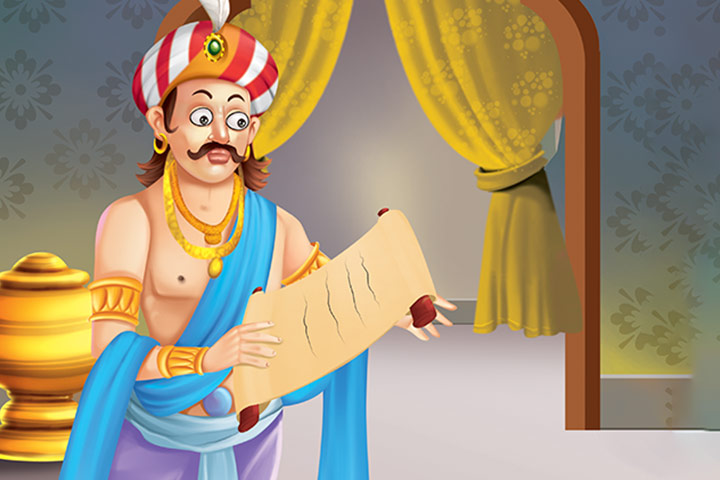 In the evening Ramaya was asked about his last wish. Ramaya said that he wanted to send a message to the king. He requested them not to hang him until the king responds to him.

Ramaya said to the soldiers, “Tell the king that my curse is a terrible curse and it passes on. If someone kills me, then anyone who sees the King’s face in the morning will lose their appetite. Tell him that if I am jinxed then he will also be.”

The king was speechless when he heard Ramaya’s words. He did not believe Ramaya but he could not take a chance.  He stopped the execution immediately. The King was very confused on what to do.

Tenali Raman said, “My King. Do you see what has happened?”

Tenali Raman said, “The curse is not real. I played a prank on you to show you that we should not believe superstitions. No man in this world is cursed.”

He was ashamed of his ignorance. At once he called Ramaya and offered him a lot of gifts. The King also made an announcement in the kingdom that Ramaya was not cursed.