One day, a horse trader came to Krishandevaraya’s court. He said to the king that he was from Saudi Arabia. He had a beautiful black horse with him. It was the most beautiful horse which Krishnadevaraya had seen.

The horse trader said, “My King, please see this beautiful horse! It is my finest and the best breed. It can run for miles without taking rest and has no fear in war.

Krishandevaraya replied, “This is the a breed which I do not have in my stable. I shall buy it from you.

The horse trader said, “My King, will only one horse be enough for a great king? I have eleven more horses in my stable. I can go and get them all for you.”

The king saw the beautiful horse standing in front of him and said, “I agree with you. I will buy all the twelve horses from you”.

The horse trader said, “My King. I need an advance of 5000 gold coins. I shall ride this horse and travel to my stables just outside the kingdom. I shall bring all bring all 12 horses over to your stable in three days.” 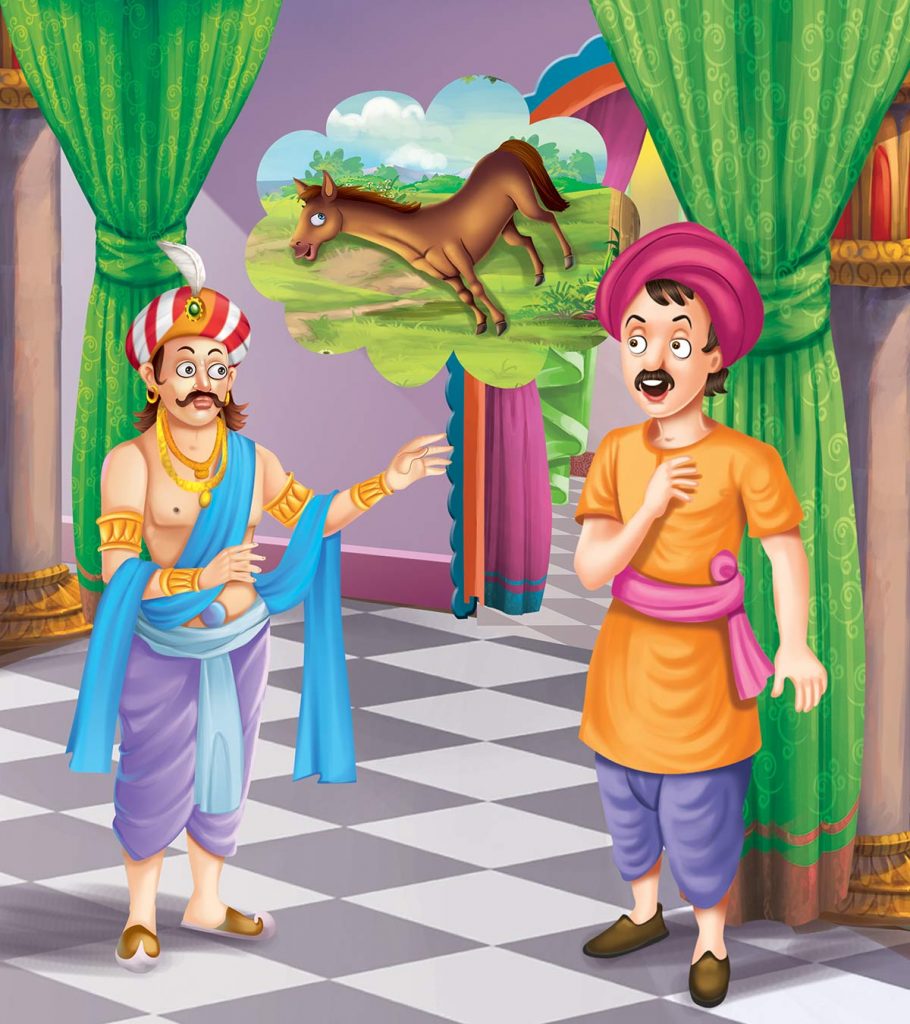 The King was very happy and asked the treasurer to give the coins to the horse trader. The horse trader took the money and left. Three days passed and then one week passed.

Krishnadevaraya became very worried. He said to Tenali Raman, “Where is the horse trader? He said that he would be back in 3 days but it was already one week”

Tenali Raman was writing something urgently on a piece of paper. Krishandevaraya said, “What are you writing so urgently, Tenali Raman?”

Tenali Raman replied, “I’m writing the list of the biggest fools in your kingdom.”

Krishna Deva Raya said, “Let me have a look.”

Tenali Raman handed him the paper. Krishna Deva Raya was very angry since his name was on the top of the list.

Tenali Raman replied, “My King, You gave a total stranger 5000 gold coins without even seeing his horses or knowing his name. You still believe that he will return.”

Krishandevaraya said, “What if he returns?”

Tenali Raman replied, “I will put his name at the top of the list and remove your name.”

Krishnadevaraya called Tenali Raman and said, “I understand why you wrote my name on the list. I will always consult you now on important matters.”

Tenali Raman gave him the list again. The king was confused. The Horse trader’s name was on top of the list and his name was not on the list.

Krishandevaraya asked, “Why is his name on the list? Did he bring the horses?”

Tenali Raman replied, “No, my King. I added his name on the list since he thought that he would escape easily. I asked two guards to follow him and he was arrested when he was trying to escape.”

Krishandevaraya was very happy and said, “You are so smart Tenali. But why is my name not on the list? I was a fool.”

Tenali Raman replied, “My King. I removed your name from the list since you are smart enough to trust me to be your minister. The 5000 coins have been returned to the treasury.”