Once upon a time, there was a man who lived in King Akbar’s Kingdom. He and his family wanted to for a pilgrimage. He put all his savings, a few gold and silver coins and some jewellery in an empty pickle jar.

The man went from his pilgrimage and then went to meet his neighbour. He asked the neighbour for his pickle jar. The neighbour brought the jar from inside and gave it to the man. When the man opened the jar, he saw that there was just some mango pickle in the jar, instead of the money. 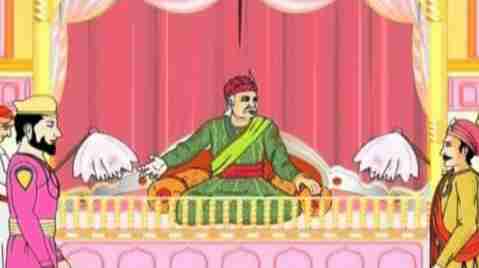 He said, “Sir, when I gave you this jar, it was full of all my hard earned money. Now it does not have any money and has only mango pickle.”

The dishonest neighbour replied, “I do not know that you gave me money. I did not touch the jar. Whatever you gave me, I am giving it back to you.”

The man started to cry and went to Birbal for justice. He told Birbal the entire story and how the neighbour was stealing his money. Birbal said that he would help the man.

Birbal went to the neighbour and asked him, “Where is the money that was kept in this jar?”

The neighbour replied, “Dear Birbal, I have told my neighbour that I do not know anything about the money. He gave me a pickle jar and I did not open the jar even once. I only took the jar from him, kept it safely and then returned it back to him. Instead of thanking me for taking his jar of pickle, he is accusing me of theft.”

Birbal asked the man, “How long were you keeping the jar?”

The neighbour said, “I kept the jar safely for 6 months.”

Birbal knew how to check the story. Birbal went out for a few hours and came back with another man.

Birbal asked him, “Dear chef, you work in the royal kitchens. Can you please look at this pickle and tell me how old it is?”

The man took one look at the pickle and said, “That is very easy to say. The pickle is not old. It is not pickled enough. It was definitely not made six months back. This man is a liar”

The neighbour started to blabber and when Birbal said that he would throw him into jail, he confessed and gave him the full money back. Birbal also made him pay a fine of 5 gold coins to the man for stealing the money.

The man was very happy that he got his money back. He thanked Birbal and the chef.

The man said, “Dear chef. You are amazing. You took one look at the pickle and said it was not even one month old. How did you do that?”

The chef said, “I am not a chef. I am Birbal’s servant. He asked me to lie and tell that the pickle was not six months old. Your neighbour confessed by himself.”